1,800-year-old hoard, including a bust of the Emperor Marcus Aurelius, secured thanks to generous support of Richard Beleson, other individual donors, Art Fund and David Aaron Ltd 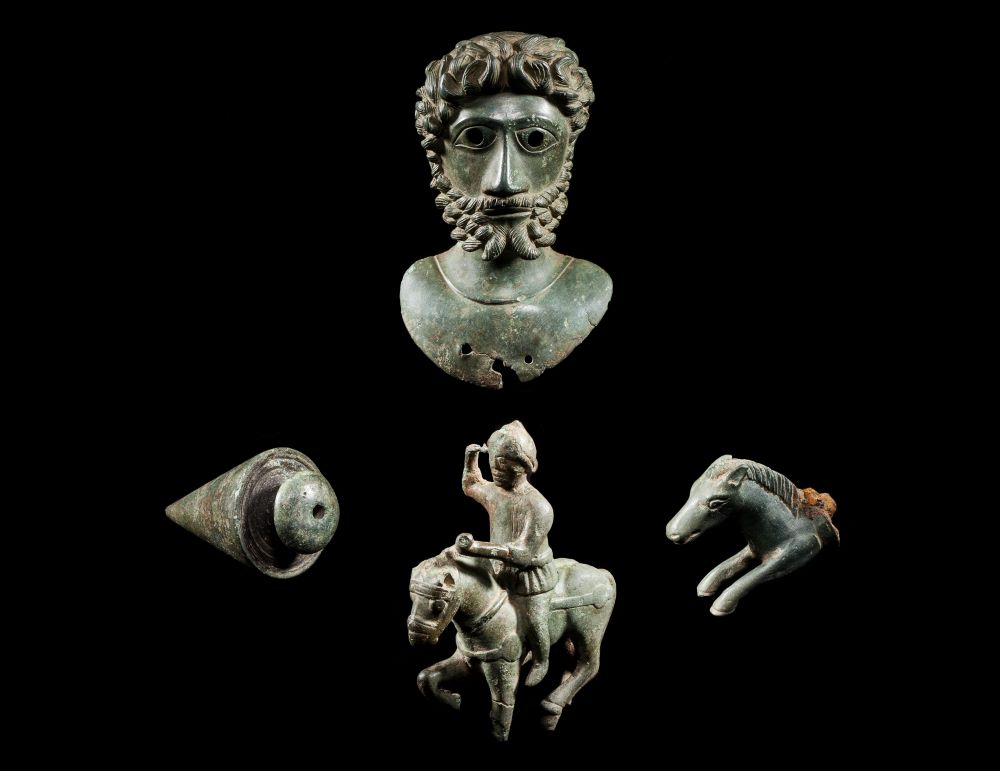 A ‘truly exceptional’ 1,800-year-old Roman hoard, which includes a bust of the Roman Emperor Marcus Aurelius, has been acquired by the Yorkshire Museum.

The 13cm bust is part of a collection of bronze objects found by metal detectorists James Spark and Mark Didlick in a field near Ampleforth in Ryedale, North Yorkshire, in May 2020.

The hoard, known as the Ryedale Roman Bronzes, is believed to have been buried as part of a religious ceremony. It also includes a statuette of the God of War, Mars, a handle of a knife shaped as part of a horse and, intriguingly, a plumb bob used for engineering projects.

The purchase was made possible largely thanks to the generosity of American donor Richard Beleson, with additional funding through Art Fund and a number of individual donors. This enabled York Museums Trust to make the purchase from David Aaron, who originally acquired the hoard at auction.

Mr Beleson, from San Francisco, who has supported the Museum previously in the purchase of the Wold Newton Hoard, said: “I first read about the upcoming Hanson’s auction of the Ryedale Roman Hoard on Facebook, and the minute I saw the bronze bust of Marcus Aurelius, I knew there was only one place in the world it belonged – the Yorkshire Museum. I am really looking forward to visiting York and seeing it on display.”

Dr Andrew Woods, senior curator of the Yorkshire Museum, said: “The Ryedale Roman Hoard is a find of national significance and great rarity. Each of the bronze objects exhibit exceptional artistic quality and craftsmanship, making them stand amongst the finest artefacts known from Roman Britain.

“It is a truly exceptional collection of Roman objects and together they have the potential to greatly add to our understanding of the Romans in Yorkshire and across the North.”

The hoard will initially be on display at the Frieze Masters in London from October 13-17 2021.  It will then become part of the Yorkshire Museum’s existing Roman collection, helping to broaden the understanding of the period, and aims to be on display to the public when the museum reopens in Spring 2022.

Dr Woods added: “Most of the museum’s nationally significant Roman collection derives from urban centres. This hoard will allow the museum to tell the important story of rural Roman Yorkshire, while highlighting Roman activity in an area of the county where previously little was known.”

Mr Beleson has been interested in Roman Britain since his childhood and first came to York in 2010 to attend a symposium on the coinage of Roman Britain. He visited again in 2019 and attended the Eboracum Roman Festival which York Museums Trust organises, along with partners such as the York Roman Bath Museum, run by Graham Harris. Mr Beleson added: “We would like to make our donation in honour of Graham Harris and the participants of the Eboracum Roman Festival.”

Significance of the Ryedale Roman Hoard

The three bronzes and plumb bob in the hoard date from the later 2nd century AD and offer a rare insight into a religious ceremony in rural Roman Yorkshire which culminated in the burial of these objects as an offering to the gods.

Most remarkable is the striking bust of Antonine emperor Marcus Aurelius. This would have sat atop a sceptre or priestly staff, a focal point for religious ceremonies. Being the face of the emperor, it is a potent symbol of the Imperial Cult, the empire-wide worship of emperors as divine. Such direct evidence of the imperial cult is exceedingly rare, especially in rural settings like this. In terms of its execution and style the bust is absolutely unique, exceedingly rare and of great national significance in its own right.

The three objects found alongside the bust help to add context to the burial of this spectacular object. The beautifully detailed horse and rider figure, a localised depiction of the god Mars, is of a type that has never been found this far north. The knife handle in the form of a horse, may symbolically represent a sacrificial animal in this context. The plumb bob is a large and fine example of a functional object used in Roman engineering projects. Its inclusion within the hoard is unparalleled in Roman Britain and hints at the focus of this enigmatic ritual being the blessing of an act of landscape engineering.

All the artefacts are preserved in outstanding condition, displaying no corrosion and being largely complete.

The hoard was discovered in the Ampleforth area of Ryedale district, North Yorkshire, England. Before the discovery of this hoard, the presence of the Romans in this area was little known. This find therefore rewrites the history of our region. The situation of this discovery, with detailed and reliable provenance information, makes the hoard even more significant.