One of the oldest objects in our Costume and Textiles collection is a coif (a type of cap) made over 400 years ago.

It was made in an age before sewing machines and mechanised factories, when every stitch of every garment was sewn by hand. We don’t know who made the coif, or who originally owned it, but join me on a journey of exploration, and we will unpick what the coif can tell us about its own history and the many people who were involved in its creation. 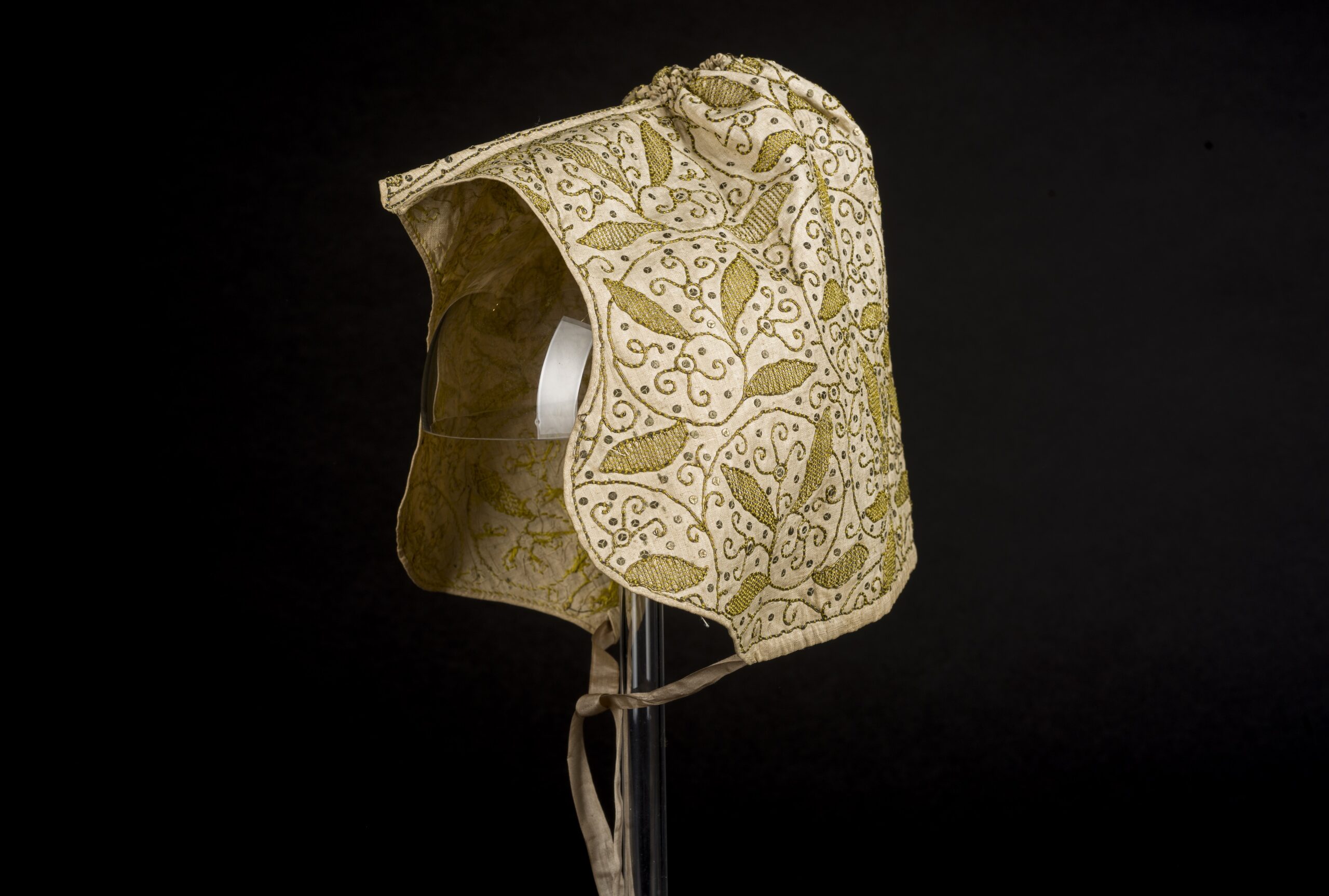 The main fabric, called the ground, is made of linen. Four hundred years ago, linen was produced all over the British Isles, Ireland and Continental Europe. It’s one of the most robust and practical of fabrics; it stays cool to the touch, even in the summer, and could endure the brutal laundry processes of the day.

Linen comes from the bast fibre of the flax plant – those are the long strong fibres inside the stem. But you can’t sew with them straight from the plant, they have to be processed first. Once the flax was harvested, the farmer would lay the stems in water for up to a fortnight, letting bacteria work on the plants in a process called retting.

After the flax was retted, the stems could be broken open and the bast fibres collected. By this point they’re long and silky, but they can’t yet be used to make cloth. They have to be spun into thread to make them strong enough to weave and sew with. This was done by hand, usually by women and girls. Some women had a spinning wheel which helped speed up the process, while poorer women spun their flax on a drop spindle, which takes far longer.

While women did the spinning, it was generally men who did the weaving. Once enough threads had been spun, the weaver could make the cloth. Looms took a long time to prepare, even for a simple fabric like this, and every stage was completed by hand.

It took a large amount of time, labour and skill just to produce the linen cloth that forms the basis of this cap. But the cloth was the least expensive of all its components.

The coif is heavily embroidered in gold and silk. These were very expensive decorations. Silk, harvested from the cocoons of silk moths, was imported from China, along long and often dangerous trade routes. The silk needed to be spun, like linen, to make it strong enough to sew with. It was also dyed. 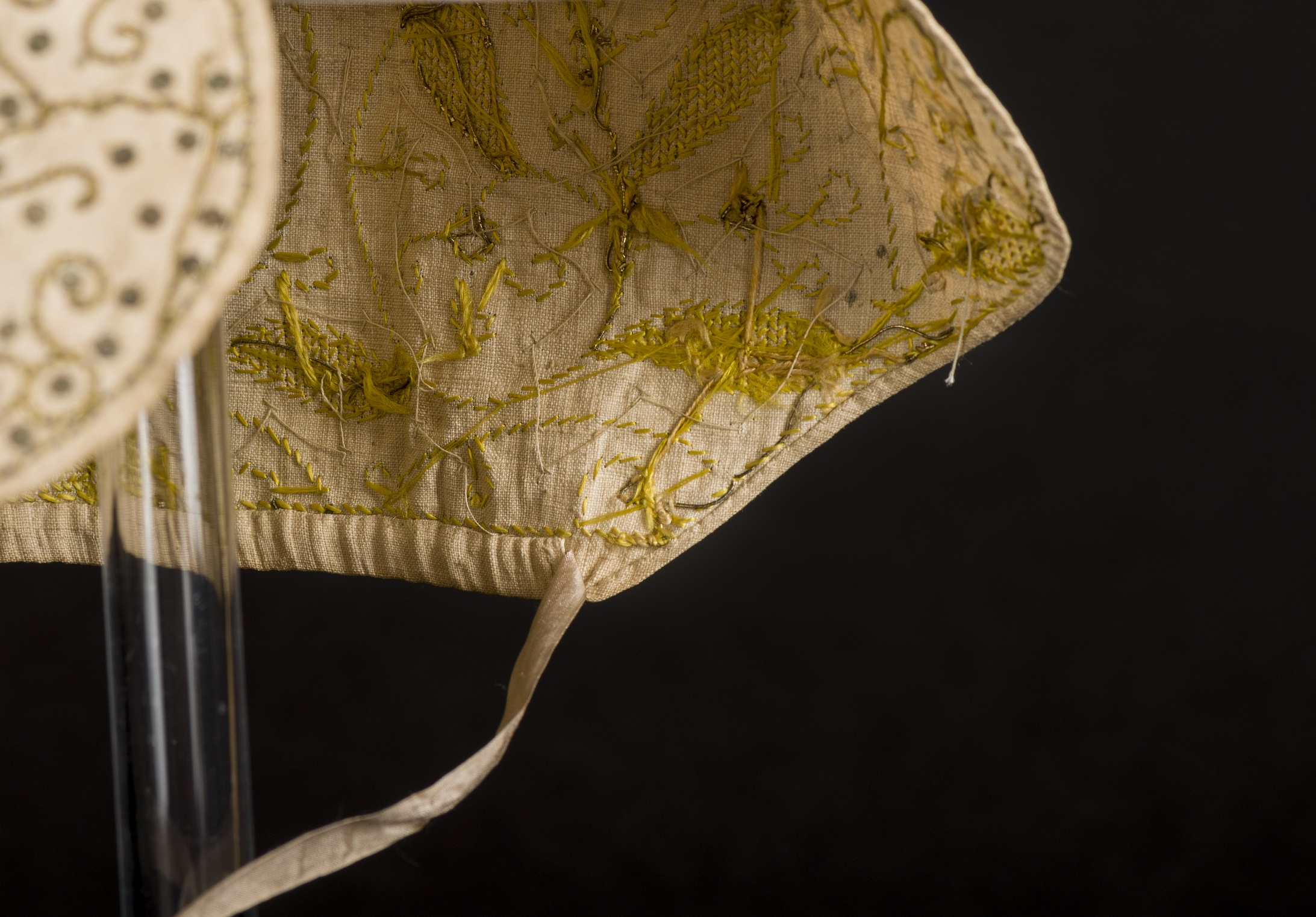 The gold probably also travelled a very long way. It could have come from West Africa, which had been the largest exporter of gold in the Middle Ages. Or it might have come from the New World; vast amounts of gold were taken from indigenous societies in the Americas as European powers sought to expand their wealth and interests. There are also sources of gold closer to home, such as Cornwall.

Gold has to be beaten very thin to make it suitable for embroidery. Preparing the gold was a skilled and specialist job. Sometimes, gold was wrapped around a core of silk to make golden thread, but in this case a strip of gold has been laid on the surface and fastened using a secondary thread. This is the thread that makes what look like little dots on the surface of the gold. This technique is called couching.

Another specialist job was the creation of the sequins. The coif is decorated with hundreds of them. They were made by hammering a sheet of metal very thin and using a punch to stamp out the discs. 400 years ago, this was not a job done by machine. Every single sequin was punched by hand.

The design was yet another specialist task. Professional embroidery workshops, usually run by men, supplied domestic embroiderers – usually women – with drawn or printed patterns. Women who had the time and money to make decorative embroidery could buy pattern books, like we can nowadays, or they could pay an embroiderer to mark out a design for them on fabric, a bit like a modern embroidery kit.

And finally, we have the embroiderer. It is likely that the person who put the coif together was a wealthy woman, sewing at home, and that she made it for herself or a close family member. The embroidery would have taken a very long time. She would also have needed to sew the cap together – including attaching a thin strip of linen binding to the curved edge, and making a channel for the drawstring at the base. Only once all these processes are complete could the coif be worn. 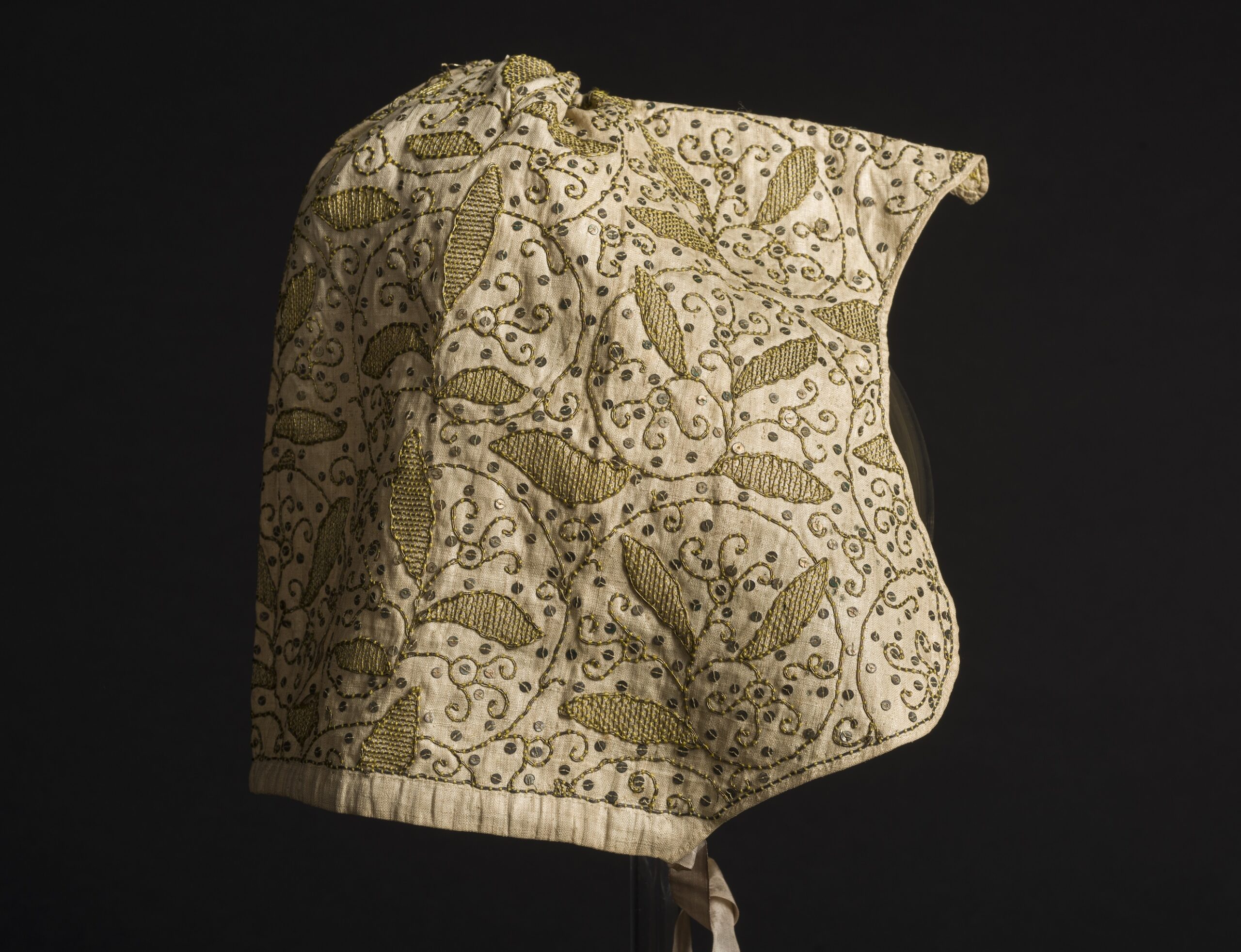 While we might say she is the maker of this object, our exploration has shown that the coif actually had many makers. We don’t know their names, or where they lived, or even how old they were. But we can appreciate their skill, and through this object we gain a tiny window onto their lives.