Buried Treasure: New Acquisitions to the Archaeology Collection of the Yorkshire Museum – By Adam Parker, Assistant Curator of Archaeology

One of the main methods which the Yorkshire Museum uses to acquire new objects is through the Treasure Act. Any object found in England that is more than 300 years old and more than 10% by weight of a precious metal is classed as ‘Treasure’ and is therefore the property of the crown.

The Portable Antiquities Scheme processes all of these objects and if a museum wishes to acquire any of them, they are independently valued and this cost is paid as compensation, split jointly between the finder and land-owner.

The Acomb assemblage is a group of early Medieval jewellery objects, dating to the 7th or 8th Centuries, which were discovered in Acomb in 2016.

The assemblage mainly comprises a group of fragments of gold geometric sheets and rings which were originally part of a disc brooch.

A small pile of copper alloy fragments probably represented the back. If this interpretation is correct, it would be an unusual type to find in Yorkshire. 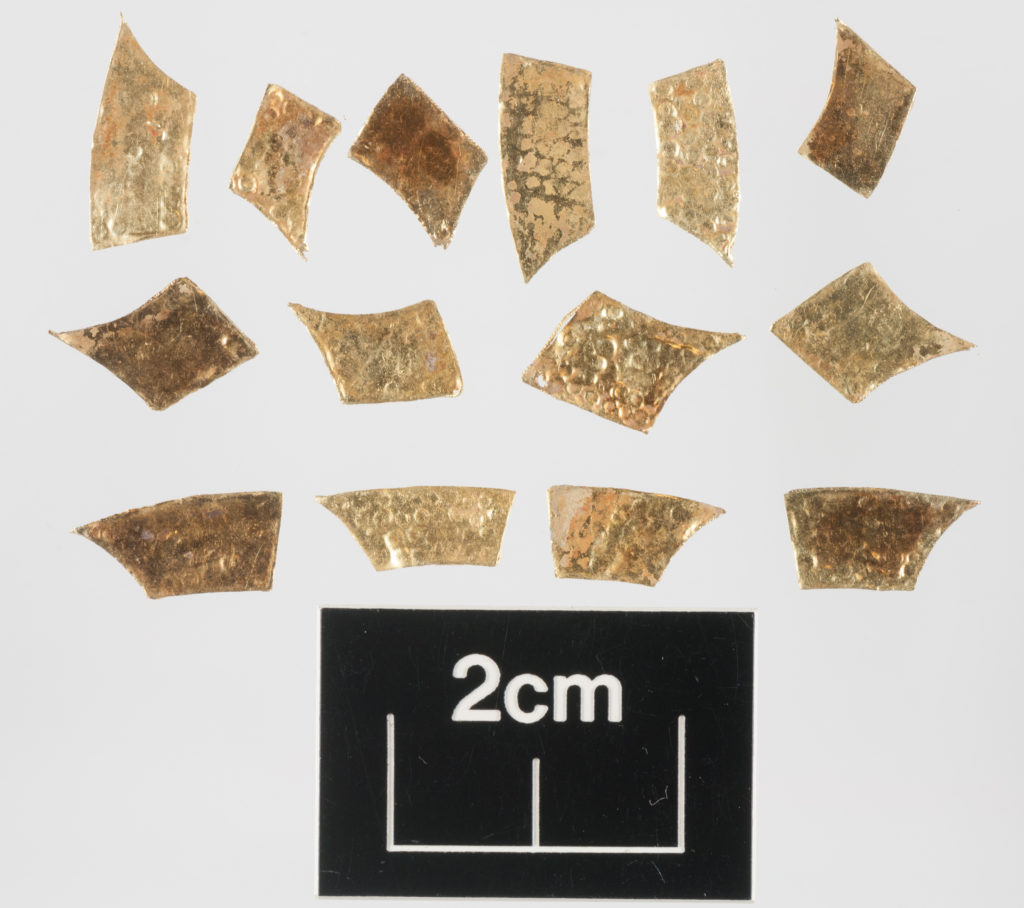 Finely worked gold plate from the front of the Acomb disc brooch.

Several glass and amber beads were found alongside the brooch, some of which may have been made in the Roman period. There are three stand-out beads in the group, one opaque polychrome barrel bead and two translucent green beads with trailed decoration which are simply incredible objects.

Two of the beautifully manufactured glass beads from the Acomb assemblage.

This group of objects would not be out of place in a female grave from the period, but investigations at the time found no human remains associated at the site.

As we have many questions to ask of this assemblage, a small research project in 2019 will help us to understand what the brooch originally looked like and where it may have been manufactured.

A vervel is the technical name for a hawking-ring; a ring worn by a hawk when used for hunting.

The Yorkshire Museum previously had no other examples of this object in the collection before acquiring this vervel in 2018. This example is silver, dates to AD 1550-1700, and bears a small shield-shaped panel depicting a horse’s head.

Originally worn by a Medieval hawk: detail of the Hutton Conyers vervel and the inscription on the band.

The exterior of the ring is inscribed with the name of its owner S WYLL MMALL (‘Sir William Mallory’) and was found near Hutton Conyers, a manor house associated with the Mallory family from the 14th Century.

The Mallorys were an upper-class, landowning family and we may have expected them to own a number of birds of prey on their estates. Hawking was a sport, a hobby, and a symbol of wealth throughout the medieval period.

Until we acquired it, this small gold object wasn’t fully understood and was referred to in all the official documentation as a ‘jewellery element’ – no-one could decide exactly what it was.

Thankfully, we are now happy to describe this object as a brooch and to suggest that it dates from the 10th or 11th centuries. It was discovered near Beal, North Yorkshire.

No longer a mystery – an early medieval gold strip pendant with enamel decoration.

More technically, it is a strip brooch from the later part of the early medieval period. The large bump at one terminal is part of a broken spring mechanism. Like a safety pin, a pin would have coiled out from the back and slotted into the base.

The back is undecorated, suggesting that it was hidden when in use (and supporting the idea that this is a brooch).

With one exception, all of the other examples of these brooches are made from copper or iron (although they may be gilded), so this gold example is truly exceptional. The fine decoration in the centre is an enamel flower; white leaves with a red centre on a blue background.

If you’d like to find out more about the objects in this blog, why not come along to our Curator’s Talks at the Yorkshire Museum?