Hi, we’re Mairi and Jade, and we’re Visitor Experience Team Members at York Castle Museum. You can normally find us on site carrying out guided tours or welcoming visitors at front desk. However, due to the current lockdown we’ve been working from home since January on a project to transcribe the museum’s accession ledgers. This was a originally a volunteers project prior to the pandemic which had to be halted due to restrictions and closure. The curatorial team devised a new way to make the ledgers available online to enable working from home. We have been the guinea pigs trialling this new system. Once York Musuems Trust are able to restart our volunteering programme, we will be offering more remote roles that will work on similar projects.

What are accession ledgers? The ledgers are books containing handwritten lists of items the museum has acquired. These can be donations, items that the museum has purchased, or transfers from other museums. Each object has its own accession number; this is a unique identifiable reference number, so we can record what we have and where it came from. We have ledgers for every year going back to 1933, several years before the museum first opened in 1938. With over 80 books we have a large collection! These original ledgers have been photographed by the curatorial team so we could then copy the information onto spreadsheets, creating a searchable digital version of each book. This will make it easy for our curatorial team to find specific items and also help to protect the ledgers, some of which are fragile from repeated handling over the years.

We have thousands of items in storage. Below, we’re going to look at several examples of our favourite objects that we’ve found in the ledgers we’ve been working on. 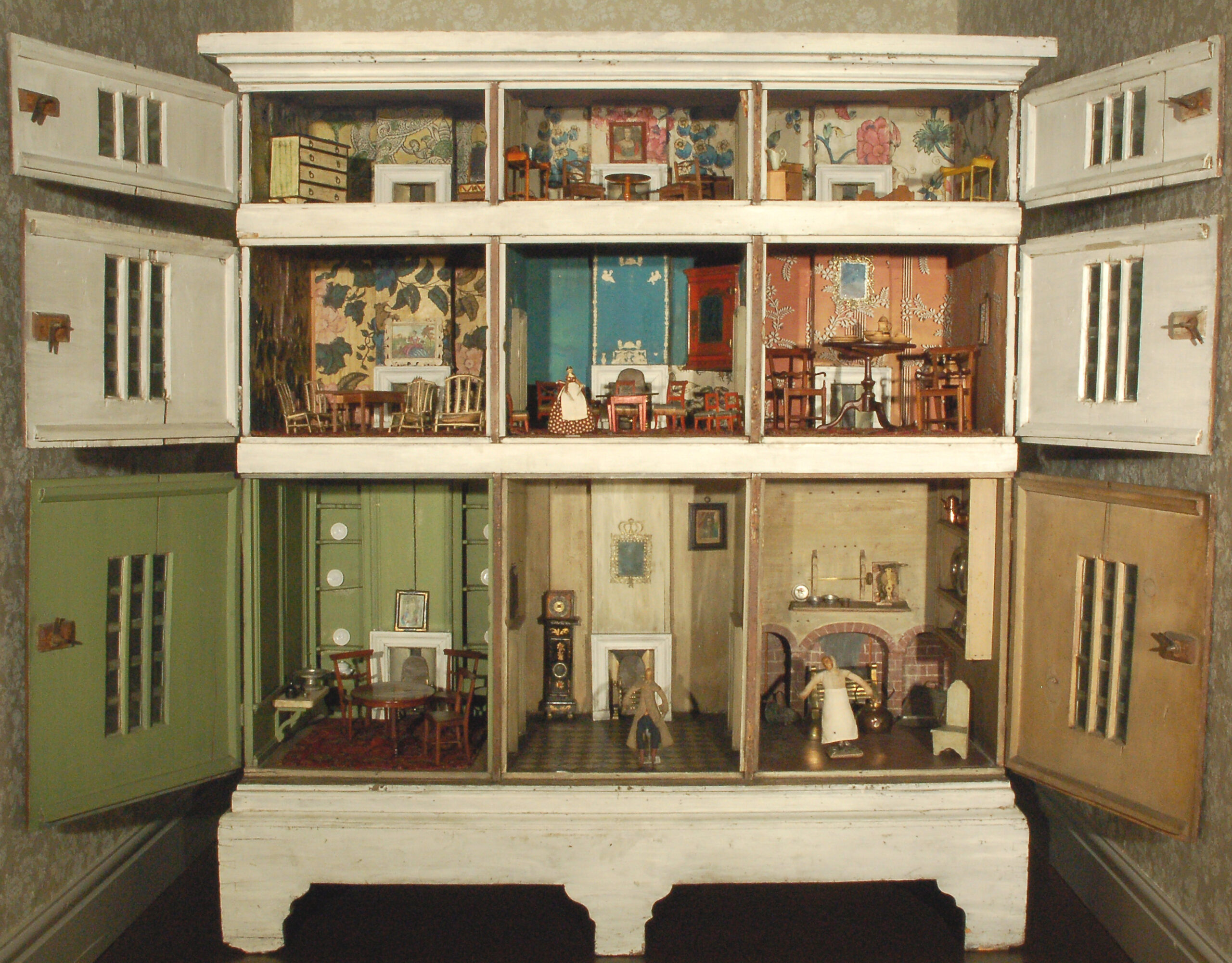 The Heslington Baby house was donated to the Castle Museum, along with a large collection of furniture, in 1955. It was thought to have been built for the Yarburgh children who lived at Heslington Hall in the 18th Century. Heslington Hall is now part of The University of York.

The House has recently undergone conservation and is in storage, but many visitors may remember it being on display in the Georgian room, and the toy gallery. It is a very large dolls house over 150 cm tall! This is a very early example of a dolls house and dates from around 1710.  It is made from wood, glass paper, metal and paint. It has nine rooms with hinged doors on each side and a removeable panel for access. Its collection of furniture dates from around 1700 to 1860. The earliest pieces are pewter plates which bear the maker’s stamp of 1695 and the walnut chest of drawers made around 1700. The wallpapers in the upper rooms also date from the beginning of the 18th century. The house contains four dolls, two of which were probably made at the same time as the house. They have wax heads and wire bodies covered with silk thread; the other two are wooden and date from around 1830.

Although ‘baby’ houses or ‘dolls’ houses mainly started out in 16th century Europe, these were only made for adults as collector’s items. They were usually made for the very wealthy from high quality materials. Often these dolls houses were a model copy of their owners’ stately homes and palaces. The 18th century saw an increase in the popularity of the children’s dolls house as cheaper materials and rustic designs were employed. The 18th and 19th century’s saw the dolls house go from display cases of the rich to playhouses for their children. They were often used to teach girls how to run a household. By the 19th century dolls houses were mass produced in factories and appealed to a middle–class audience. In the 20th century the dolls house was made in a wide variety of sizes and materials and is still loved by children today. High-quality miniature dolls houses also still remain an important item for collectors. 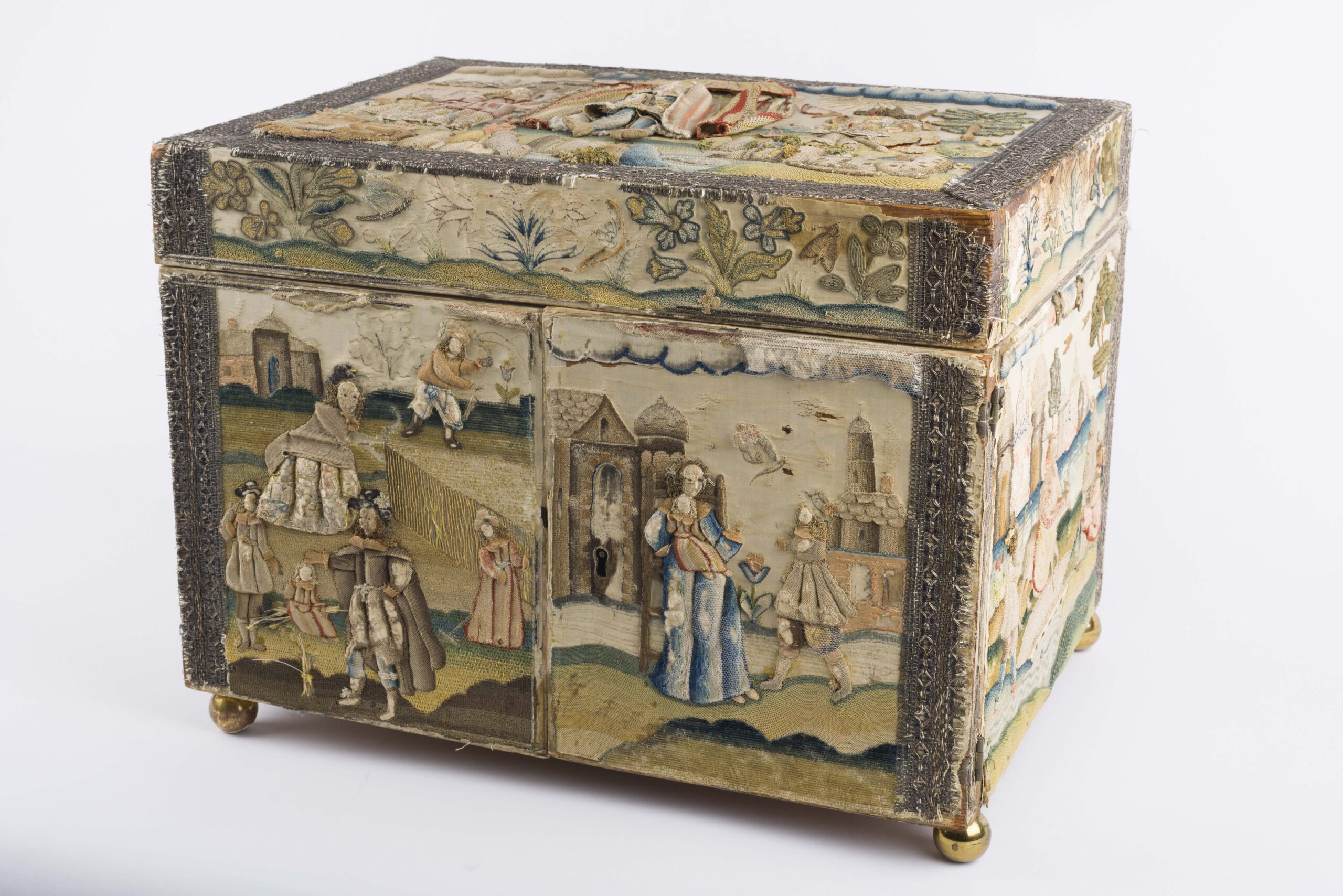 One of the oldest items I came across in my ledger was an embroidered box dating from around 1640. The exterior is decorated with stumpwork panels, depicting scenes from the Bible, representing the story of Elisha and the Shunammite from second Book of kings. The inside is covered in thin eau-de nil-colored silk decorated with silver braid. The box has a deep lid with quilted interior panels on either side of the mirror space. It has a top tray section which has small drawers with lidded compartments. The lower section consists of double doors which reveal two drawers in the lower half. A vertical sliding panel also conceals six small drawers, and there are also two hidden compartments.

The earliest embroidered fabrics can be traced as far back as 30,000BCE. Recent archaeological digs have found preserved fragments of clothing and fabric with basic hand stitched decoration. Embroidery has been practiced all over the world with examples found from Ancient Egyptian tombs to the ancient Greeks and China. By the turn of the first millennium embroidered fabrics and tapestries were an important part of life. Intricate and detailed fabrics were a symbol of wealth and status. Tapestry was also a great way of telling a story with one of the most famous being the Bayeux Tapestry, which told the story of the Norman conquest in the 11th century.

Stumpwork was the height of fashion in the mid to late 1600s. It used beautiful silks and wools, silver and gold threads and other luxury materials with wool stuffing to make 3D designs. Biblical scenes like the one on our box were very popular but they could also depict political scenes too,. and characters often reflected the fashions of their day. They usually had black stitching around the designs. Patterns could be copied from published pattern books or bought from embroidery workshops. Embroidery and stitching were an important part of a girl’s education. Girls would start by learning simple stitches on a sampler and once they had perfected their needlework skills, they could try their hand at raised embroidery. Once the many small pictures were completed, they could then be sent to a professional craftsman who would make up the finished box. Jewlery boxes, trinkets and caskets were the most popular, but we also see examples of stumpwork on items such as mirrors, books and footstools. 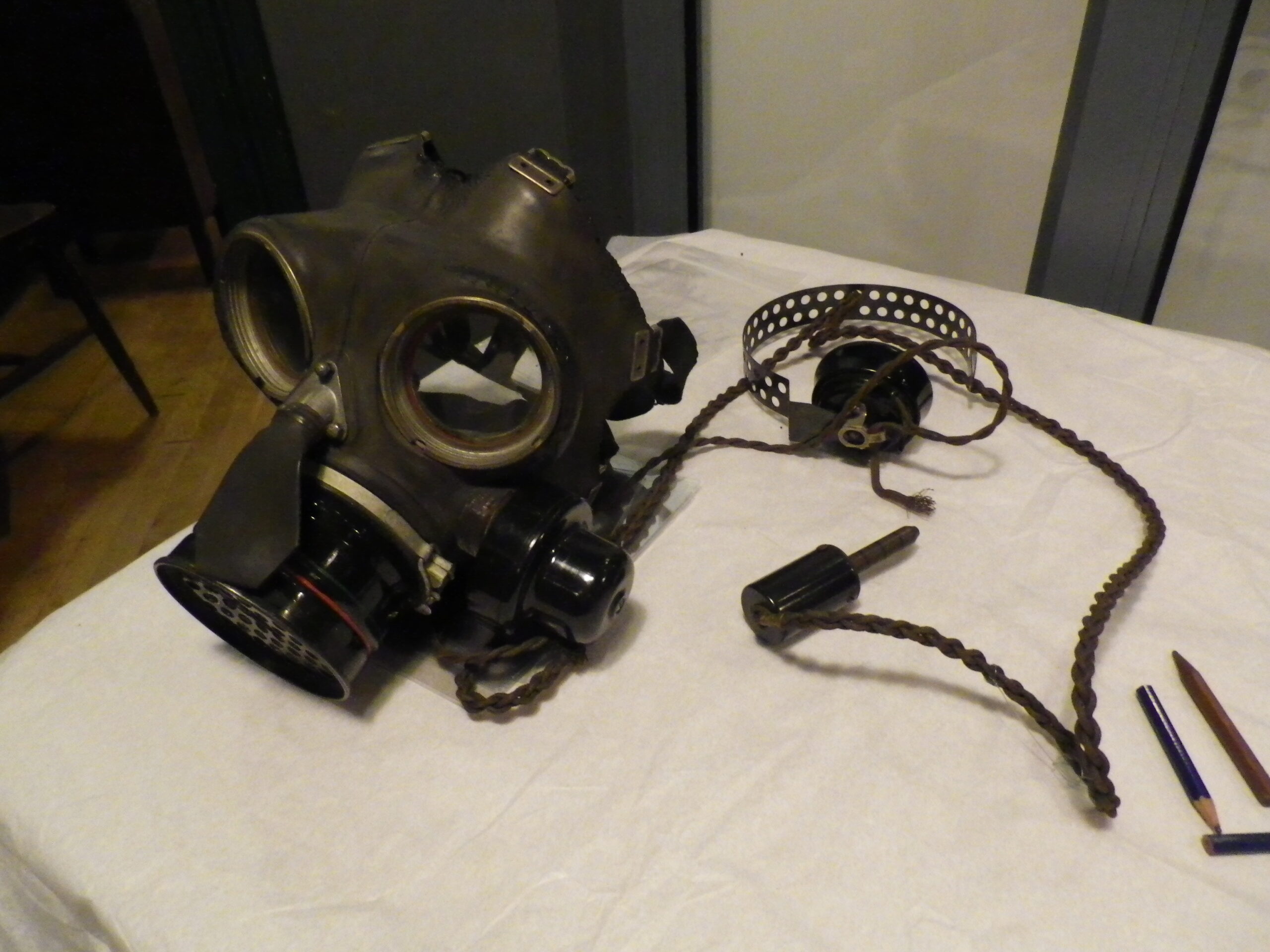 This respirator, or gas mask as they’re more commonly known, dates from 1936-1945 and is made of black rubber with a filter at the front. Gas masks are a common sight in museum collections, however this one is a bit different! It has been specially adapted and fitted with a telephonist’s microphone, headset and an exchange jack plug which allowed the wearer to plug directly into the telephone switchboard. These gas masks were issued to telephone operators to ensure that communications could still be maintained during a gas attack and demonstrate the high level of innovation during the war. 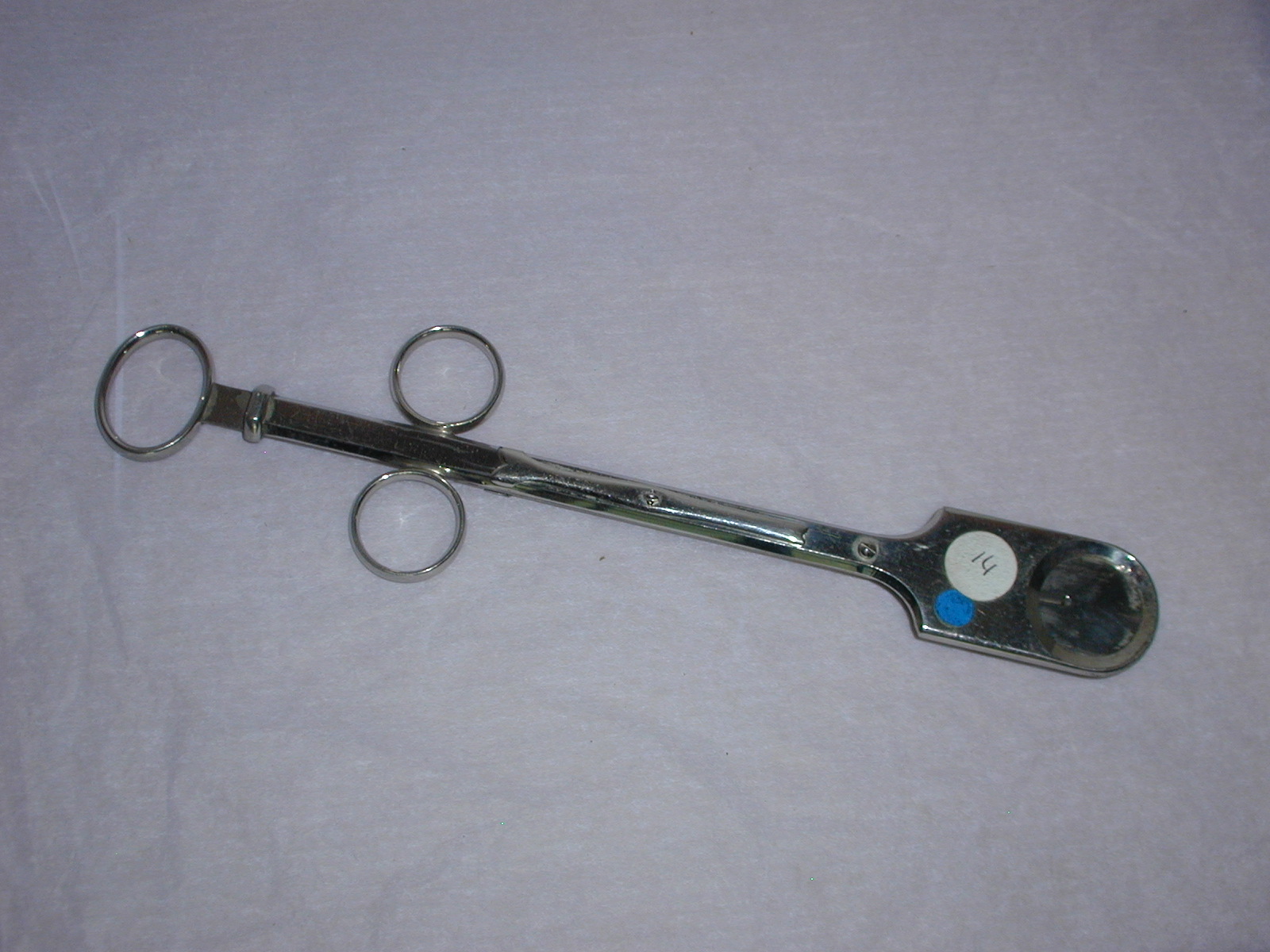 My latest ledger has so far consisted of medical instruments, most of which make me appreciative of modern medicine! Items I have found so far include: an electric hairbrush which was supposed to prevent baldness or thicken hair, scarifiers (used to make small incisions in the skin for bloodletting), and a baby feeding bottle which was described in the ledger as a ‘murder bottle‘’. These types of bottles were supposed to enable young children to feed themselves and therefore proved popular with Victorian mothers. They generally consist of a glass bottle with a long rubber tube which reaches to the bottom. This was virtually impossible to clean, causing bacteria to build up. Sadly, this led to the death of many young children, earning the bottle its infamous nickname. Visitors may remember the electric hairbrush as it is currently on display in our Chemist’s on Kirkgate, our recreated Victorian street.

Also in this ledger were several tonsil guillotines, which are exactly what they sound like: an instrument used to remove the tonsils. This was a common tool used in tonsillectomies during the late 1800s but gradually fell out of favour during the 1900s due to side effects which included heavy bleeding and recurrent sore throats. No wonder, when you consider that one of our tonsil guillotines is described as having ‘an impaling spike to spear the tonsil’! 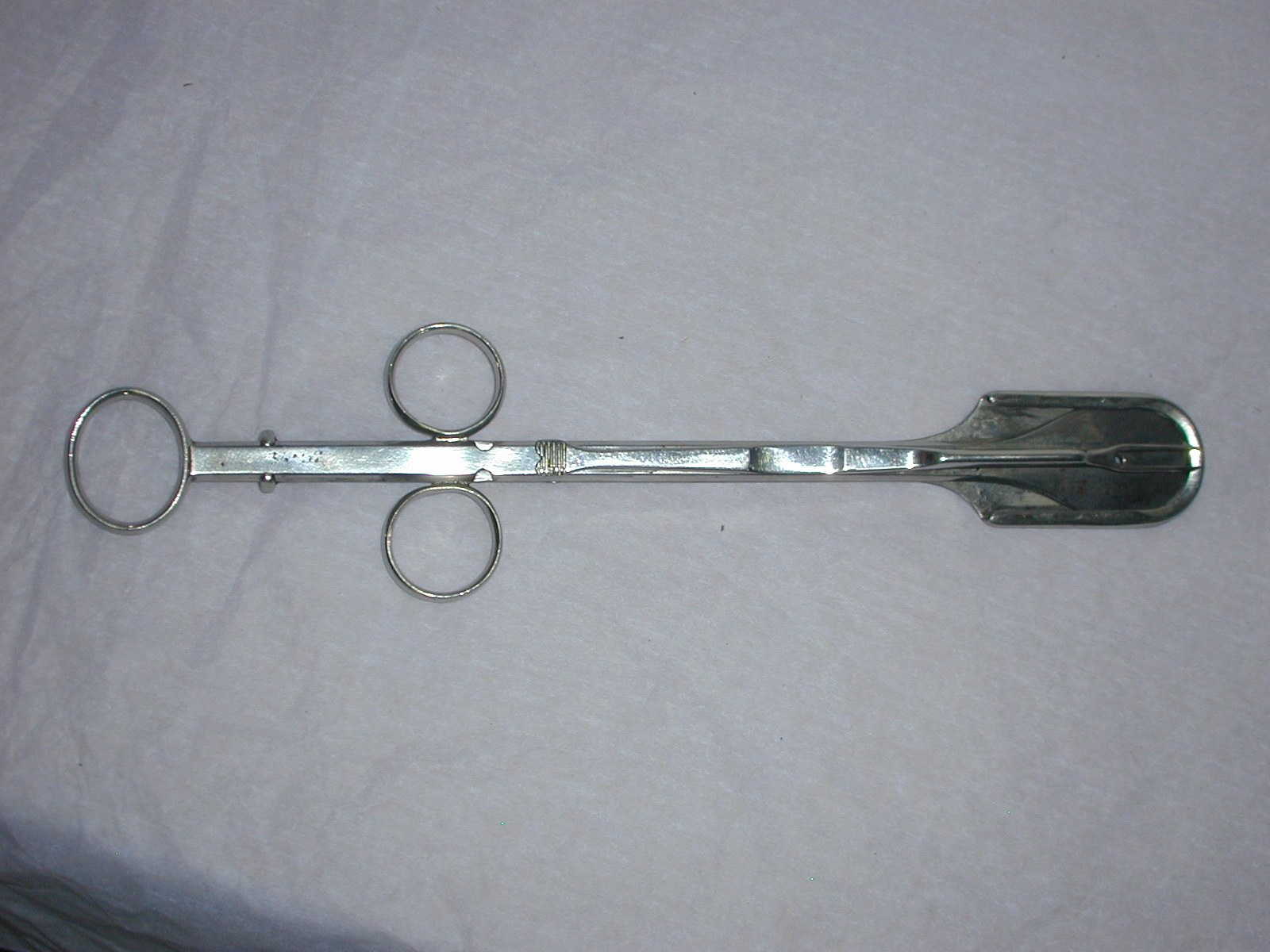 I’ve also been struck by some of the similarities between Victorian medical items and items we’re currently using in the pandemic such as vaccinators and an intriguing item called an Aethereon Respirator. This item is a type of face mask and consists of a metal plate surrounded by cloth covered padding to fit around the mouth, with an elastic tie to secure it around the head. It was designed by British surgeon Julius Jeffreys in 1836 after the tragic death of his sister from tuberculosis. The respirator warms the air breathed in by the wearer, allowing people suffering from respiratory problems such as TB and asthma to enjoy fresh air. In the later nineteenth century, the respirator was marketed as also preventing respiratory illnesses such as coughs and colds and protecting the wearer from the smog-filled air in many Victorian cities. 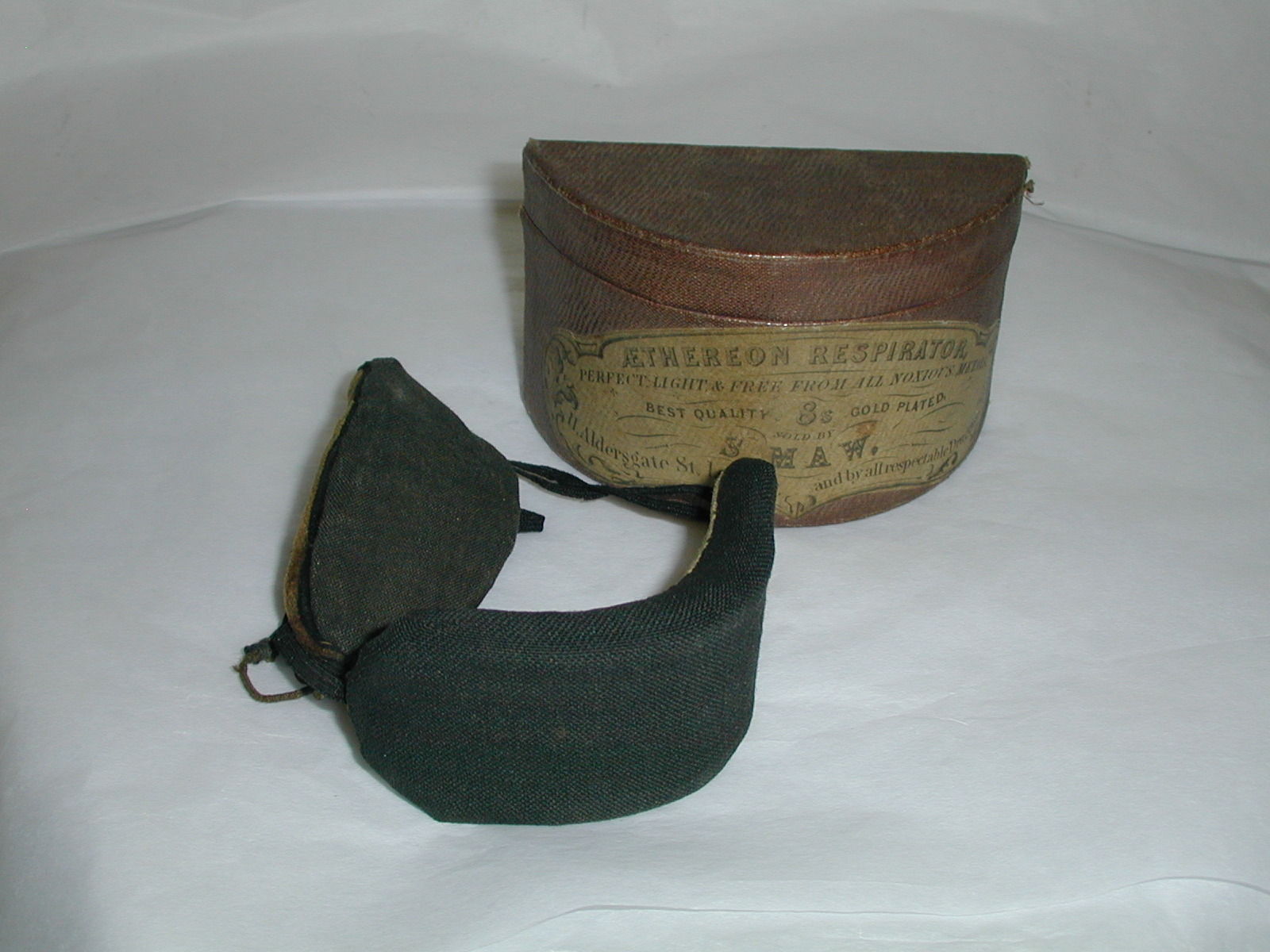 Our version is gold plated and cost 8 shillings for a box of two (about £26.50 in today’s money). This was equivalent to one day’s wage for a skilled tradesman, meaning this item would only have been affordable to the wealthy, although cheaper alternatives were available. The masks come with their original box, sold by well-known London surgical instrument maker Solomon Maw. As you can imagine, the design could make it difficult for wearers to talk and compared to our modern masks it was also probably quite heavy. The metal design also made it virtually impossible to clean, ironically meaning that you were probably more likely to get ill from wearing it. This object is also currently on display in our Chemist’s on Kirkgate.

We haven’t been working alone, there has been a large group of Visitor Experience team members also working on the project. However, with so many ledgers to transcribe this will be an ongoing project when we are back at the museum. One of the biggest challenges has been deciphering some of the difficult handwriting and for this we had a query list so that other team members or curators could see if they could decipher them. Usually, another pair of eyes would do the trick, but there are some words that we may never be able to make out!

It has been such an enjoyable project and so interesting finding items in the ledgers that we had not come across before. We’ve also loved finding out where some of the objects from the museum had originally come from. The project has highlighted many interesting items such as a ring dating from 1750 found during renovations to the city walls in 1831, and the uniform of the Mansion House butler dating from 1945. It has also highlighted several items relating to York Castle Prison, such as a leg bar and waist girdle believed to have been worn by Dick Turpin, a bone tool carved by an inmate of the Debtor’s Prison, and a cape worn by an inmate’s wife when she visited him in prison. Overall, this project has helped to enhance our knowledge of what is in the collection and opened up new avenues for research.