York Castle was a grim prison for many political or religious dissenters. Victims included the Knights Templar, Catholics who resisted the Reformation, Jacobite followers of Bonnie Prince Charlie, and the Luddites, Peterloo protesters and Chartists of the 19th century – to name a few. Some were gaoled in the old Castle buildings and others in the 18th century prison buildings, which now house York Castle Museum. 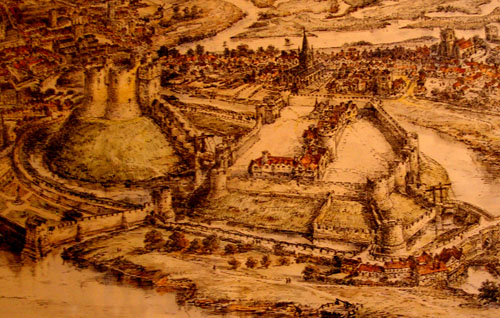 Where did they put all the prisoners? The old York Castle site according to Edwin Ridsdale Tate

Curiously, the group which suffered most is probably the least remembered of York Castle’s victims.

In terms of sheer numbers imprisoned and the total years of life consumed in York Castle’s gaols, it was Yorkshire Quakers who bore the lion’s share of suffering.

A huge number of Quakers were imprisoned in the old York Castle buildings, hundreds at a time, during intense, systematic persecution in the reign of Charles II (1660-1685).

After the 1660 restoration of the monarchy, a harsh government campaign targeted Quakers as potential dissidents. This was partly because Quaker principles forbade the swearing of any oath, even the newly revived Oath of Allegiance to the Sovereign.

During November and December 1660, raids on Quaker Meetings and homes took place all over Yorkshire. Quakers were arrested, ordered to swear the Oath of Allegiance and hauled off to York Castle, the County Gaol, when they refused.

By the end of 1660 there were 505 Quakers imprisoned in York Castle. It’s a puzzle how so many were imprisoned.

After two months almost all survivors were released. For during this episode and subsequent mass imprisonments of Quakers, intense overcrowding led to waves of prisoner deaths from disease. At least 25 Quakers died in York Castle during Charles II’s reign. 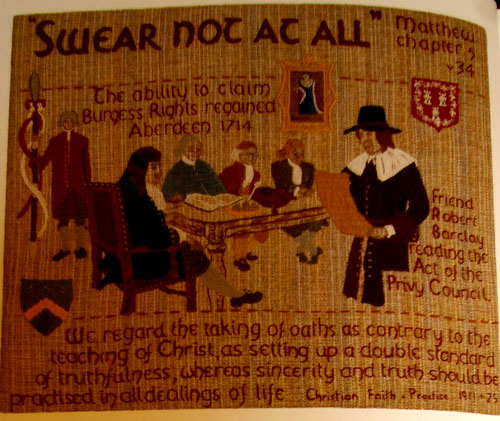 The Quaker stance against swearing oaths – from the Quaker Tapestry

Arrests of Quakers continued throughout his reign – and with lengthy prison stays. By the 1680s the Castle’s Quaker prisoners were organising surveys which recorded reasons for their imprisonment and length of prison stay in order to support petitions for their release.

In 1684 the Castle had become so overcrowded that the head gaoler began housing extra Quakers elsewhere – to the fury of an Anglican official who stated explicitly that he wanted them put out on straw in the Castle Yard like pigs.

Charles II imprisoned Quakers who were simply seeking to practice their faith peacefully. Predominantly these Quakers had been charged with refusing the Oath of Allegiance or with attending Quaker Meetings or not attending Church of England services, which were now compulsory. However Quakers had not always protested so peacefully.

Soon after the birth of the Quaker movement in 1652, during Cromwell’s government, some early Quakers were repeatedly imprisoned for impassioned heckling of Church of England clergymen during sermons. A lone Quaker would stridently confront a preacher about the error of his doctrines in front of the congregation.

Of the first 35 Quaker imprisonments in York Castle under Cromwell, 30 reflected such behaviour. They included individuals who later became famous Quaker missionaries, like Elizabeth Hooton and Mary Fisher, who took Quaker teachings as far afield as America and Turkey. York Castle became a base where such fervent Quaker prisoners inspired each other to write Quaker pamphlets and smuggled these out for publication.

The victims of Charles II’s persecution, however, had generally not sought to confront the system in such ways. Out of 275 Quakers in York Castle in 1685, only one was imprisoned for a dispute with a clergyman.

By the late 17th century, new laws removed most grounds for imprisoning Quakers. William III allowed them freedom of worship and exemption from oaths, though they were still banned from many influential roles. The great persecution was over. Only military duties and the ‘tithe’ tax for financing the Church of England remained as points of conflict between Quaker conscience and the government.

Very many people – Quakers and others – have been gaoled on the York Castle site for following their conscience. Yet there’s little there today which commemorates them. Should this be remedied? How? Any ideas or views in the ‘Leave a Comment’ box, please.

A full report on this research is available here: Clifford’s Tower, York Prisons and Courts.

Charles Patmore was a volunteer on the Castle Museum’s ‘Rebels’ project which studied people imprisoned on the York Castle site for political or religious reasons.

He is also the author of Choice Guide to York, U.K., the only York guidebook to cover the history of the Castle site.